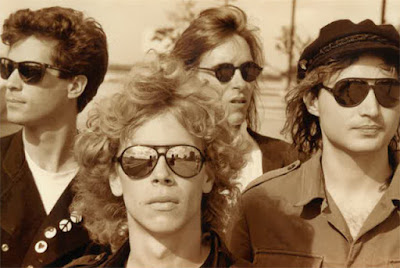 Some People's Children was a band formed in the mid-1980s that played Electronically-infused post-New Wave progressive music.

Formed by four friends who met at Broward Community College in 1985, SPC combined musical influences such as Thomas Dolby, Mike Oldfield, Peter Gabriel and Depeche Mode into something that was uniquely South Florida in the 80s. At their root was solid musicianship married to technology. Synthesizers, drum machines, samplers, computer-based sequencers all meticulously wired together into a MIDI-powered music box of sound. The result was something musically complex, yet very melodic, strange and memorable.


After a couple years of developing their sound in their elaborate home-based studio, SPC took to the stage. They performed local shows, got local press and had 5 songs in regular rotation on local radio. The next step in the natural progression of things was to release an album. The plan was to release a 6-track EP in late 1989.

And then Tip's student visa ran out.

So like many a band before them, Some People's Children dissolved on the shoreline of success, their potential unrealized and their music relegated to the cut-out-bin of South Florida's music history.

That is, until now.

One of the great things about this band was their technical foresight. As such, Tim Reed Starling saw fit to preserve the band's recorded material early on in digital format. Now think about this. Here were four guys with one real job between them who somehow found a way to get all of these songs mastered to PCM. There was no DAT tape affordably available at the time. There were no recordable CDs. But alas, here is a local band whose unreleased material from 1988 & 1989 is perfectly preserved. It is clean and pristine with all of their creative choices bared naked to the world. It is a remarkable listen.

So here we are, 30 years down the road, the members of Some People's Children have decided to embark on a project to complete the idea they originally proclaimed on a flyer in 1989: To release a 6-song cassette entitled "THIS IS NOT A TEST!" Of course, there are a few modern updates to the idea. There will be downloads available, and it will of course be available on all of the major streaming services.  In addition, the members of SPC have decided this should be a charitable endeavor. ALL of the proceeds from this project will be donated to UNICEF. A fitting way to cement the legacy of a band that brought together so many people.

And that may be the greatest legacy of all....
Email ThisBlogThis!Share to TwitterShare to FacebookShare to Pinterest
Home

All proceeds go to: